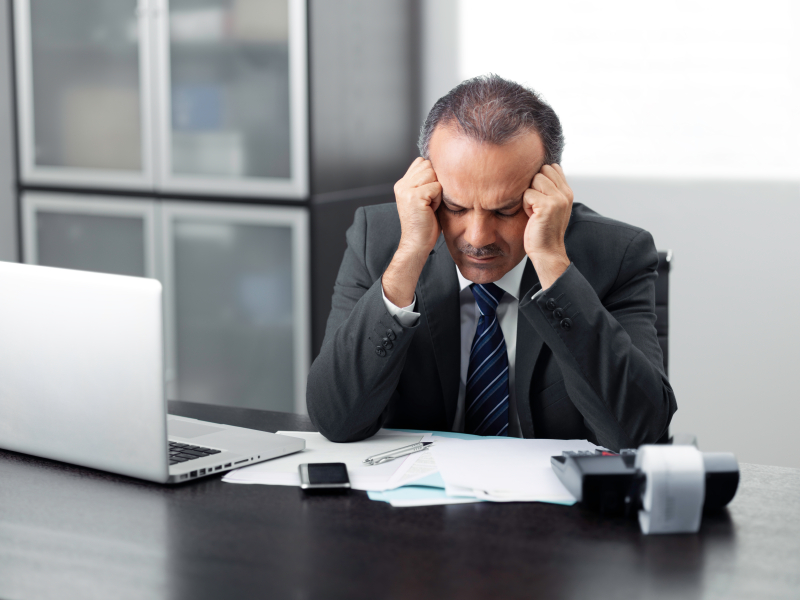 Juggling multiple priorities comes with the territory of leadership. As a CEO, you want to be perceived as in control and on the ball. But when an important priority is not moving forward, you will have a general sense of ‘stuckness.’ The more quickly you can identify this condition, the sooner you can address it.

The good news is that stuckness typically generates four distinct feelings you can use as early indicators: frustration, fatigue, blame and helplessness. The culmination of these feelings will trap the CEO in the role of victim. Observing, admitting, and addressing these feelings will help you diagnose the issue with precise clarity, allowing you to take action steps early toward ownership and action, the natural antidotes to being stuck.

The Symptoms of the “Victim” State

The first symptom – frustration, is one of the initial indicators of stuckness. Often, frustration comes from trying to apply familiar methods to problems that require novel solutions. For example, a CEO who is a brilliant engineer may try to apply the same winning formulas that made him/her such a successful engineer. If the problem is bigger than the CEO can analyze his/her way out of, this proven approach may not work. Or when the market changes and our previously-successful business model no longer works, we have an early indication of stuckness. When methods that were once effective stop working, it results in frustration.

The second symptom – fatigue, will invariably appear when progress halts . Fatigue comes from having a lot to do, and not being able to get it all done. Surprisingly, you find yourself able to pour lots of energy into the projects that are moving forward, but feel exhausted even thinking about the project that is stuck. This disproportionate energy suck is a sure warning sign of a project in or nearing trouble.

As frustration and fatigue mount, it’s natural to move toward the third symptom – assigning blame. It provides some sense of twisted “satisfaction” believing that, even though we are not moving forward, at least we know why! Someone else is causing the delay. Perhaps a customer is being unreasonable, or the Board refuses to come to a decision, or your design team seems to have left their creativity at home for the past month. Blame protects us from the pain of accepting ownership for the frustration and fatigue we feel.

This cycle of frustration, fatigue, blame and helplessness defines the victim state. When stuck in this role, a CEO essentially relinquishes responsibility for the difficult issues that are preventing forward movement. The leader is missing-in-action when needed most.

Take Ownership of Your Situation

While this story may seem extreme and a bit depressing, it is both true and quite an opportunity. Experienced CEO’s have achieved hundreds if not thousands of goals and objectives during their career. To suggest that they never got stuck and experienced these feelings along the way is absurd. The only real question is how quickly they are able to diagnose what is happening and intervene on their own behalf.

Studying the symptoms of stuckness provides an opportunity to air the truth that CEO’s are not superheroes, but human beings who experience the same feelings as everyone else. Paying close attention to those feelings, giving oneself permission to acknowledge them, and identifying their source provides an early warning system that allows the accomplished CEO to more quickly and proactively move back into action.

It has been said that a proper diagnosis is 50% of the cure. Similarly, clarity about the source of one’s inaction is a sure jumpstart to reengagement.